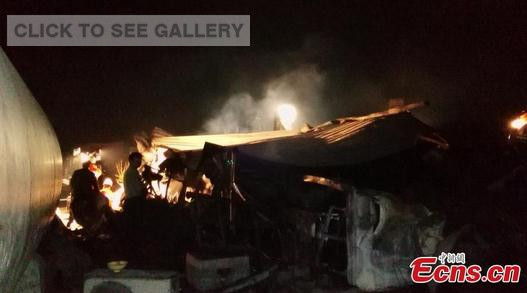 Sun Huashan, deputy director of the State Administration of Work Safety and head of the task force, pledged to discover the cause of the fire, which killed 38 people and injured another six at a rest home Monday night.

The inferno at a row of bungalows at the privately owned Kangleyuan Rest Home in Lushan county, Pingdingshan, started at 7:33 pm, according to the provincial publicity office on Tuesday morning.

President Xi Jinping ordered "all-out efforts" to treat the injured, comfort families of the dead and "properly handle" the aftermath of the fire. He demanded a thorough investigation into the cause.

The blaze swept through the 130-bed complex, where 51 senior citizens lived, before being put out at 8:22 pm.

"We will severely penalize authorities and individuals responsible for the fire and try to prevent similar disasters from happening again," said Sun.

The official also promised timely disclosure of the progress of the investigation.

Guo Xin, a 78-year-old man survived the fire, noted the "bad quality" of the burned dorms, which he said were "built with iron sheets and without foundations".

The Ministry of Public Security held an emergency video conference Tuesday evening to deploy safety work after the Henan fire.

"We must draw profound lessons from the fire, paid for with blood, and always place the safety of people's lives and property on the top priority," Public Security Minister Guo Shengkun told the conference.

"Any problem or potential danger should by no means be neglected," he said.

The home's legal representative is in police custody and all workers at the home have been taken away to assist with police investigation.

The rest home project was approved by local civil affairs authorities in 2010. It covers an area of two hectares.