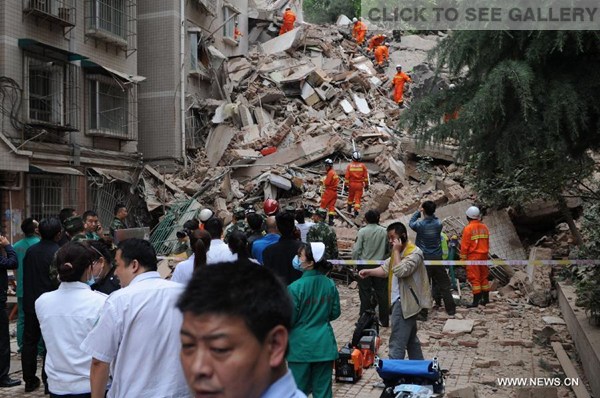 Rescuers search for survivors at a residential building collapse site in Guiyang, capital of southwest China's Guizhou Province, May 20, 2015. A nine-storey building collapsed in Guiyang on Wednesday. Rescuers have confirmed that there are people trapped inside, but casualties are not known yet. (Photo: Xinhua/Long Rui)

Sixteen residents from an apartment building that collapsed partially are still not accounted for in Guiyang, capital of southwest China's Guizhou Province on Wednesday.

The third and fourth units of the No. 21 apartment complex in a residential community in Yunyan District collapsed at 11:30 a.m. due to a rain-triggered landslide, said the Guiyang city government.

An initial investigation showed 114 residents from 35 households live in the collapsed sections.

As of 5 p.m., 98 of the residents were confirmed safe. Sixteen others cannot be reached, but mobile phone signals of 15 of them were detected at the scene.

More than 100 rescuers are combing the debris with sniffer dogs and life detectors. A four-month baby was pulled out from the debris and rescued.

A man surnamed Zhang who lived on the ground floor was pulled out by rescuers. He told Xinhua that he was awakened by loud noises. He was about to run from the building when he was buried by falling debris.

Another resident who declined to give her name was worried about her daughter-in-law. "She lived on the ninth floor," she said. "I called, but couldn't reach her."

Residents of nearby buildings were evacuated after the accident.

In a separate case, seven were killed after a loess hill landslide buried nine people in four farmers' houses in north China's Shanxi Province on Tuesday evening. One was rescued and in stable condition. One remains trapped.